This picture is a detail of ‘Emperors of the Elements’ and is the Earth Dragon. The full quilt can be viewed on my web page. 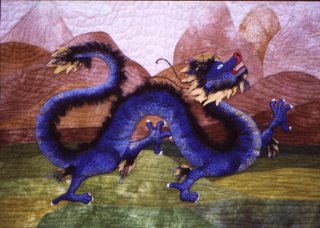 Right, it was time to try some more dragons, but the question was how to do them differently. First, step, reasearch at the local library. I read a wonderful book full of Chinese Folk Tales. No illustrations to copy, but great short stories that fired my imagination as to just what a dragon means in Chinese literature. A great leap forward in the creative angle, not using any one else’s artwork as reference to draw these dragons, but my own imagination and practice from having drawn numerous dragons already. I drew the backgrounds separate and after drawing each dragon.

I began with the water dragon. All 4 dragons have been made using pretty much the same techniques. First, I painted the dragon body parts using fabric paints onto cotton poplin. They were cut out and vlisofixed onto the backgrounds. Backgrounds were pieced by using a freezer paper pattern and each piece had the seam turned and then blind hem stitched down onto a tearaway backing. I followed the instructions for the technique in a magazine article by Gloria Loughman. The fire background was done raw edge and straight stitched, because I couldn’t handle the small curves with seam allowances. Each dragon was satin stitched down, machine embroidered in a circular motion to give scaley texture, and had fringed knitting yarn and metallic threads couched down, and other loose bits added for dramatic effect. I couldn’t purchase a blue yarn to match the Earth Dragon, so I bought some nylon dye and overdyed to get the dark blue.

I originally planned each dragon as an individual piece, but, after reading the entry rules for the World Quilt Competition, realised that if I wanted to enter quilt shows, I needed to make larger quilts, so decided to join them all together. Border design came about after all 4 finished. The black/gold fabric came about with a friend’s help. She laid a similar commercial fabric alongside and it worked. But me being me, pulled out a piece of black I had at home, loaded up a spray bottle with watered down gold paint, and made my own black/gold fabric. Easy. Chinese writing was taken from a Chinese/English dictionary, and the right column reads “dragon emperor earth fire air water” or it is supposed to, if I did it correct. I needed a central column of text, and I came across the 10 heavenly stems in the ancient chinese calendar, so that’s what I used there. For the actual quilting, I just followed the landscapes around the dragons. After pouring over countless Chinese art books, I found a pattern on some ancient pottery which I copied and used in the blank border areas. Interestingly, I have found this same pattern used in other ancient cultures.

So that’s how the quilt came about. My first large art quilt. The quilt won 1st place pictorial section in the 2003 Queensland Quilt show, and in 2004 was accepted into the World Quilt & Textile Competion and flew off to the U.S.A. where an aquaintance reported back that it was very nicely displayed at the venue where she saw it at.